Dogs Chemically Neutered with a Shot 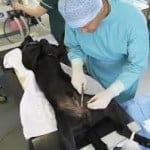 Dogs Chemically Neutered with a Shot. Traditionally, neutering a male dog required anesthesia and surgery, both of which come with a variety of risks. But what if your dog could be neutered without surgery or anesthesia? A new procedure referred to as “Chemical Dog Neutering” is now being offered by a handful of veterinary clinics. The dogs are neutered by receiving a injection given directly into each testicle. Although the thought of this makes some people flinch, because a dog’s testicles have no nerves, the procedure is basically painless.

According to a study published in the American Journal of Veterinary Research, complications are rare and recovery time is short.

Restricting your dog’s activity 3-5 days after the injection is the current recommendation.

The manufacturer, Ark Sciences, reports that over the last 2 years, approximately 3000 dogs have already undergone the procedure. The injection which is sold under the name Zeuterin is actually a solution of zinc gluconate.  Zeuterin is FDA approved for puppies 3 to 10 months old.

The injection kills sperm and scars the dog’s testicles resulting in permanent canine sterility within 30 days.

Sedation is not required but is an option available many dog owners elect, to help avoid discomfort. 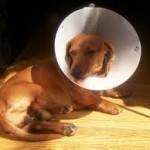 The testicles shrink in size and become a bit more firm after the injection, but still remain visible to the eye. Dog owners previously worried about their dog’s appearance post-op, no longer have to consider Neuticle’s or testicular implants for cosmetic purposes.

The production of Testosterone, which is the male sex hormone produced by the testicles is greatly reduced but not completely eliminated. The value of this is that canine behavioral issues, aggression and urine marking are eliminated but low levels of Testosterone still circulate through the bloodstream. Believe it or not this is excellent!

Why?…. because Testosterone is a vital hormone  that helps to protect and maintain many aspects of your dog’s health and wellness, including his bones and joints as well as the heart, muscles and brain.

It is valid to understand that before a veterinarian can be approved to give this drug, he or she must undergo 5 hours of training. Complications after the injection are rare as previously stated, but improper injection technique as well as improper care post injection can lead to severe tissue damage as well as scrotal ulcers. Note that similar complications can occur after traditional canine neutering as well.

Dogs that have been neutered with this injection wear a special tag on their collar and in addition are tattooed in their groin area with a green Z.

Representatives from the manufacturer, Ark Sciences, expect the drug which was approved by the Food and Drug Administration in August of 2012, to become widely available to low-cost spay and neuter clinics and private veterinary practice clinics by the end of this year or very early in 2014.

At this time there is not a similar product available for female dogs. Oral contraceptives are being tested but none yet have been 100% effective.