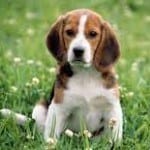 Dog Diabetes Cured with Single Shot. Researchers from Spain have been able to cure canine diabetes Type 1 with a single session of gene therapy. Five lucky beagles tested in the study showed no signs of diabetes and recovered their health status and body weight for over four years after therapy.

The therapy consists of one session of injections given in the skeletal muscle of the hind leg. The injections provide two gene therapy vectors. One vector helps to express the insulin gene and the other gene acts to regulate an enzyme called Glucokinase.

Glucokinase is an enzyme that regulated glucose or blood sugar uptake from the blood. When both genes act at the same time they function as a “glucose sensor, ”automatically regulating blood sugar uptake by the blood which results in lowering the excess sugar or glucose in the blood.

This study which was published in the Journal of Diabetes is the first of its kind to demonstrate a long term cure for diabetes in animals, other than mice, using gene therapy.

This research paves the way for diabetes to be cured in people as well as pets. Potentially this study may also offer insight into new therapies for Type 11 diabetes.

Gene therapy has proven to be both safe and efficacious. It is based on transferring two genes to the hind leg muscle of animals using a new generation of very safe vectors called adeno-associated vectors, abbreviated as AAV. The vectors are derived from non-pathogenic viruses. They are already being used in gene therapy and have been quite successful in treating a wide variety of diseases.

Dogs treated with a single session of gene therapy exhibited good glucose control at all times, both when fasting and when fed. The blood sugar regulation in these dogs proved to be superior to those documented using insulin injections and episodes of low blood sugar, referred to as hypoglycemia were eliminated, even after exercise. Long-term optimal control of pet diabetes has never been previously accomplished with any other novel diabetes therapy. Results confirmed that this gene therapy injection maintained normal blood sugar levels for over four years in dog diabetics with no secondary complications at all. For example, secondary complications resulting from diabetes including cataracts, blindness and kidney disease did not occur.

The strategy reported in this study is being prepared for clinical translation. This will act as the basis for initiation of clinical trials in veterinary medicine for diabetic dogs and cats. Those results will then be used to supply critical information not only for veterinary patients but eventually for human diabetics as well.

This novel gene therapy not only offers these diabetic pets relief from the disease but also the potential to enjoy a normal life without the need for daily insulin injections or the risk of future blindness.