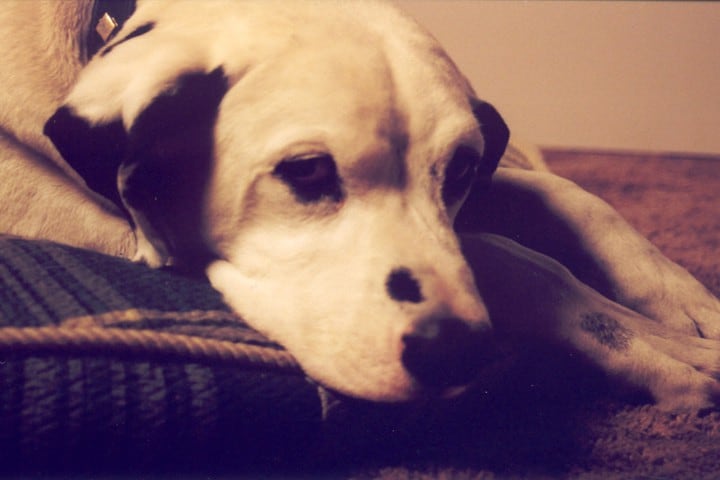 Over the last decade advances in veterinary medicine have nearly doubled the canine life span. The technological innovations we now offer for pets, parallel those available for people, reaching far beyond our previous expectations. What are the factors limiting longevity in pets? What impact do anti-oxidant supplementation and dietary intervention have on lengthening healthy life spans for pets? Successful techniques for rejuvenating the body and lengthening life spans in people have been documented. Would similar strategies prove effective for dogs?

George, a 7 year old Dalmatian not only suffered from severe arthritis, he was also paralyzed, due to a spinal injury. Surgery cost was estimated at $4000, with no guarantee of success and little hope of him ever walking again. George’s owners, Don and Pam Brennan were devastated and sadly carried George out of the office that day on a stretcher. He couldn’t even stand up to go to the bathroom. With tears streaming down their faces, they knew it was the end. They spent that night together saying their final goodbyes.

The next morning a friend told them about ongoing clinical trials of an anti-aging pet product. This was their last chance. They had nothing to lose, so they gave it a try. Within 30 days, George was out in the front yard playing with the other dogs. He was back to the way he used to be, playful like a puppy. George enjoyed several healthy, happy years thereafter. Pam and Don were thrilled-they got their dog back!

Anti-Aging medicine, although not yet formally recognized by the AVMA, is the newest clinical medical specialty offered to human physicians. So, why wouldn’t this be applicable for veterinarians as well? When scientists unraveled the genetic code, they discovered that the canine’s genetic makeup is almost identical to ours. Consequently, it seems that physiologically the two species share similar mechanisms relative to the aging process. Recent research validates this fact.

Anti-aging medicine, the “optimum” of wellness and longevity, employs extensive therapies and treatment in the preventative health care field far beyond annual vet checks and blood chemistries. A profound paradigm shift in the way the veterinary establishment views aging and age related disease is now underway.

Pet owners are demanding a radically different approach to how vets view and treat aging pets. Demographics of human aging necessitated a change from the current disease based model of medicine, to a more preventative, proactive approach. Why should aging in pets be viewed any differently? Instead of waiting until a pet is sick or is showing signs of illness, they could visit their vets, perhaps 2-3 times a year, to monitor potential illnesses or conditions—BEFORE they occur.

The Aging Process: What is Aging?

Aging represents the accumulation of adverse changes in cells and tissues that increase the risk of death. Aging changes can be attributed to development, genetic defects, environmental factors, disease, and inborn aging processes. At a molecular level, the process of aging has been linked to a number of events including damage by free radical reactions, deteriorating immunological function, senescent genes, and chromosome changes.

Many Theories of Aging: 1 Universally Accepted

Although five aging theories of aging currently exist, Dr. Denman Harmon’s Free Radical Theory of Aging is the most universally accepted. As a result, substantial recent research has been focused on modulating or enhancing the capability of cells to defend against oxidative damage, at both the cellular and molecular level.

Cellular defenses are collectively called antioxidant defense, and represent the ability of a compound to protect the body from oxidants, thereby inhibiting oxidative damage. The body’s natural antioxidant defense system is complex and includes enzymes (such as superoxide dismutase, catalase, reductase, and glutathione peroxidase), free radical scavengers (such as carotenoids, ascorbic acid, and tocopherols), and metal chelators.

Antioxidants have been shown to act synergistically and have sparing effects in which one antioxidant protects another against oxidative destruction. Antioxidants protect biomolecules by scavenging, and protect the body by repairing oxidized tissues, destroying badly damaged molecules and replacing them with new ones. Biomarkers of oxidative DNA damage and lipid peroxidation have been used to establish the fact that antioxidants play a protective role in human health and disease. Similar studies in veterinary medicine lacked funding and as such, have been limited. But times are changing and generous donations from pet loving establishments have made this a new reality for pets. Veterinarians now have access to a wide array of nutriceuticals and diagnostics which potentially allow them to offer similar anti-aging strategies and therapies for pets. The demand for vets to incorporate and utilize anti-aging pet protocols in practice is increasing and a handful of forward thinking clinicians are jumping onto the band wagon.

So, What is Optimal For Dogs & Cats?

Prevention, early disease detection and prompt intervention, combined with good nutrition, exercise and regular veterinary visits are the cornerstones of good health. Although the aging process is different for every animal (large and giant breeds tend to age faster than smaller ones) it generally begins at maturity, somewhere between one and two years of age. Most dogs become senior citizens at seven. Giant breeds are considered seniors at age 5.

The Facts on Pet Age

To determine whether or not a dog is old, it’s important to distinguish between chronological and biological age. Chronological age is determined by the year in which your pet was born or the number of candles on your dog’s birthday cake. Biological age, which is the focus in anti-aging medicine, is determined by how your dog looks, acts and feels. Aging begins at maturity; when the body’s systems start to slow down-when cells deteriorate faster than the body can repair them. It is a progressive decline in mental and physical functioning and appearance.

Pet Health and Longevity
Longevity is attributed to 70% to lifestyle and 30% to genetics. Up to 90% of diseases in dogs are due to the degenerative processes associated with aging. Therefore even if a dog or a cat is genetically predisposed to certain diseases, there is a 70% chance that early intervention, lifestyle changes and optimal nutritional supplementation can deter and slow the aging process significantly, and enhance the dog’s healthy life expectancy.

A successful pet longevity program starts by supplementing your pet’s body with the critical nutrients it needs on a daily basis and working with your veterinarian proactively. Veterinary medicine is now able to selectively offer pets many newer life saving techniques. Telemedicine offers access of board certified veterinary specialists to vets and pets in even the most rural communities, canine blood banks accurately tested to identify the pets blood type are available for transfusions, dog blood types are now categorized, MRI’s have become routine and stem cell therapy is being successfully performed in certain canine cancer cases.

Telemerase research is progressing, in fact researchers at the University of Pennsylvania School of Medicine successfully engineered transplantable living nerve tissue in a paralyzed Labrador Retriever. Results were published in Tissue Engineering. While these therapies reflect the ultimate in health and wellness, limiting factors including cost are real and in time it is likely that insurance companies will incorporate pet wellness plans and therapies in their policies. The current lack of standardized, accurate protocols available to veterinarians for pet aging, nutriceuticals dosages and safety issues are also ongoing concerns that must be addressed. Dr. Osborne is formalizing universal nutriceutical dosages for dogs and cats. With the universal support of pet lover’s worldwide, continued research, dedicated veterinarians and ongoing education, the implications for our canine’s future are infinite.

New Year’s Tips to Get Pets & their People into Tip Top Shape
January 1, 2021

Dr. Carol Gives Some Tips on Caring for Your Pet in Cold Weather
December 27, 2020

It’s Peak Package-Delivery Season, Here’s How To Help Your Dog Through It
December 11, 2020