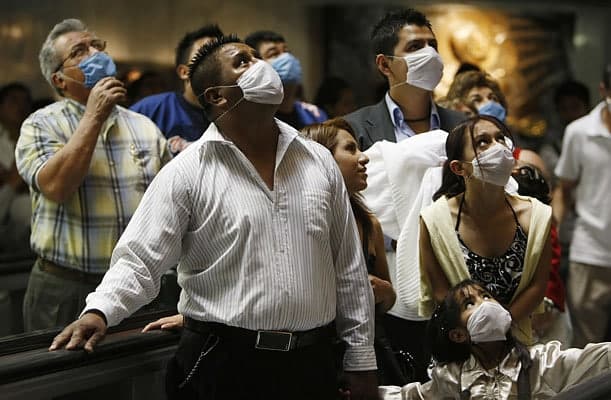 Swine Flu. A National Health Emergency has officially been officially declared for Swine Flu in the US! April 28, 2009, Chagrin Falls, Ohio: The world is on the brink of the first influenza pandemic in more than 40 years. This escalated last Sunday as France, Hong Kong, New Zealand and Spain reported potential new cases in which people had been infected with swine flu. According to the World Health Organization, there are 66 confirmed human cases of Swine Flu in the U.S. and two people have been hospitalized. No deaths have been reported as of today. The threat of a worldwide pandemic is real! President Obama spoke to a group of scientists and said that his administration’s Department of Health and Human Services “has declared a public health emergency as a precautionary tool to ensure that we have the resources we need at our disposal to respond quickly and effectively.” The alert level has been raised from three to four now that the virus is being spread directly from person to person. The Center for Disease Control (CDC) announced that Americans should be prepared for this problem to become more severe, and that for some, it may become fatal.

Over 150 people in Mexico have died and spread of the virus appears to be gaining momentum. Two thousand people in Mexico are currently under observation for Swine Flu. From a global perspective, European Nations advise avoiding all non-essential travel to the US and Mexico. China, Russia, and many Asian countries are considering quarantines.

Customs officials, wearing protective gear are carefully monitoring all people entering the US from other airports, seaports and border crossings, looking for any signs of fever and/or illness. A national health emergency has officially been declared in the US and 12 million of the 50 million stockpiled doses of flu-fighting, antiviral medications have been allocated to be sent to state and local communities in case they are needed. The World Health Organization (WHO) admits the new virus is already resistant to Amantadine and Rimantadine, two most popular anti-viral drugs, but appears to be sensitive to Tamiflu, at least for now. Health care workers in Mexico have already been infected by the H1N1 virus, reports the CBC in Canada.

“We have determined that this virus is contagious and is spreading from human to human,” says the CDC on their web site. But they don’t know exactly how contagious the disease really is, or what the fatality rate might be. U.S. residents who were infected have recovered, while many infected people in Mexico have died. It is not yet clear why there is a difference in the survival rate across these two countries.

Signs of swine flu (H1N1) infection include fever, sore throat, muscle pain, coughing and shortness of breath. This can escalate into serious respiratory illness with difficulty breathing and, ultimately, death. Notably, the CDC website does NOT report infections unless they are confirmed by CDC laboratories.

This Monday eight cases were confirmed in a school in New York, which has since been closed. Fourteen schools in Texas, including a high school where two cases were confirmed, will be closed for at least the next week. A few schools in California and Ohio have also been shut down after students were found or suspected to have the flu. The first confirmed case in Spain has been reported and another 17 people are suspect. In New Zealand, three people that recently returned from Mexico are being monitored for Swine Flu and new cases are being reported in Canada.

Swine Influenza Virus (SIV) is a highly contagious, transmissible or what is called a Zoonotic Disease and appropriate precautions should be followed by all individuals including veterinarians working with pigs.

Recommended safety measures include washing your hands, wearing masks and gloves while working with sick or deceased swine and using personal, protective equipment such as N95 respirators and goggles, to minimize the risk of infection and disease spread.

Swine owners, pig producers and veterinarians alike need to be very alert for any suspicious cases. Vets need to be observant of any pigs showing “Flu”-like signs, including pigs that have been previously been vaccinated against SIV as the vaccine may or may not be effective against the current strain

Veterinarians should submit tissue samples including nasal swabs and lung tissue to the Veterinary Diagnostic Lab from any pigs that are acutely sick and /or have a fever if they suspect influenza.
Vets need to try to increase awareness among swine producers and ensure appropriate biosecurity safeguards are in place to help prevent the introduction of this virus into U.S. swine herds.

It is a good idea not to allow any visitors onto pig farms and should any employees have flu-like signs they should not come into contact with pigs and need to see their physician. The National Pork Board has additional recommendations which are available and are published on the AASV homepage website located at www.aasv.org.

Information about the Swine Influenza Virus in the US and Mexico
The current swine influenza virus has been identified in the U.S. and in Mexican cases. The virus is an H1N1 strain. This is a triple re-assortant containing genes from two swine viruses, an avian (bird) virus and a human virus. The HA gene is the common gene seen in pigs today (H1). While not yet confirmed, it is likely that commercially available SIV vaccines may be effective.

Update on Swine Flu and US Food Sources
According to federal authorities, there is no current food safety issue. It is said that US pork is safe to eat.
66 human cases in the US have been confirmed by the Center for Disease Control (CDC), although none of them had any direct contact with pigs.

For the most current up to date official information, please refer to the Center for Disease Control (CDC) website at http://www.cdc.gov/swineflu/investigation.htm.

Mexican authorities are reporting a severe influenza incidence this year with hundreds of illnesses and multiple deaths attributed to a swine influenza virus. The CDC has tested 14 isolates provided by the Mexican authorities. Seven of these have tested positive for SIV and are very similar to the viruses identified in the U.S. cases.

The pathogenesis of this virus in pigs is unknown. The USDA’s National Veterinary Services Laboratory (NVSL) and National Animal Disease Center (NADC) will be evaluating the current diagnostic tests and conducting challenge studies in pigs to determine the virus’ virulence and clinical presentation in pigs.

This virus appears to be transmitted directly from person to person. Presently, our nation’s primary efforts are being directed to try to prevent the introduction of this virus into U.S. pig herds.

In Conclusion, this virus is not known to be in U.S. pigs at this time. Pork is still “said” to still be safe to eat. The Swine Influenza virus is being spread directly from person to person and does not need pigs for disease transmission to occur in humans. There is no current indication that dogs or cats are succeptible to this virus.