Senior Dog Health Care. Of the 62.4 million dogs in the United States, 18 million are age seven and older; therefore they qualify as ‘Seniors’. This represents almost one-third of our canine population. In fact, over 75% of our dogs and cats have passed middle age and are entering their ‘golden years’. To call a dog old, one must not consider chronological age, but rather physiological condition. Biological and chronological aging are not inexorably linked.

Aging begins when your dog’s body’s systems start to slow down ‘ when cells deteriorate faster than the body can repair them. We think of it as a progressive decline in mental and physical functioning and appearance which is accompanied by an increase in susceptibility to chronic canine diseases. This is caused primarily by three factors: Genetic inheritance, declining hormone levels and oxidative stress.

Though the aging process is different for every animal, it generally begins at maturity, somewhere between one and three years of age, depending on breed.

As with humans, actual canine chronological age, in other words, the year in which the dog was born, is often less important than biological age, which is determined by how a pet eats, moves and feels. Age related changes in body composition, organ function, mental alertness and endurance vary with each individual.

Advances in veterinary science over the past ten years have made it possible to retard and reverse many of the common phenomena which collectively comprise aging. Reducing oxidative stress along with proper nutrition are paramount to proper health. 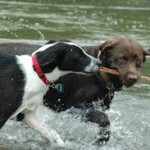 After two years, one dog year is equivalent to approximately four human years, so a ten-year old dog is really about 56 human years. In general, large and giant breeds tend to age faster than smaller breeds.

The natural metabolic processes of our bodies as well as the toxins in our environment subject us to the damaging effects of harmful compounds called free radicals, which increase as your dog ages. These highly toxic molecules damage your dog’s DNA (genetic material) and proteins, and make them more susceptible to cancer, corrode their arteries and increase their risk of heart disease. In effect, they cause your dog’s body to ‘rust’ just like oxygen does to iron.

Pet Antioxidants are the body’s natural defense against free radicals. In addition to fending off free radicals, they also help protect cell membranes and DNA. Antioxidants, include Vitamins A, C and E; minerals like Zinc and Selenium; and other natural nutrients such as alpha Lipoic Acid and Co-Enzyme Q10. They decrease the level of oxidative stress and can be prescribed in specific formulas for pets as needed.

There is still alot to learn about canine longevity but for now, we realize that every animal ages at a different rate and in different ways. Monitor your dog and especially watch for changes at about 5 to 7 years of age and if necessary make changes accordingly.