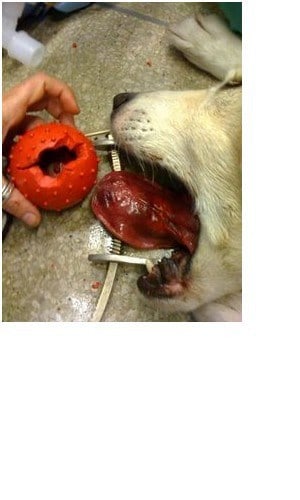 A dog, named Chai, ended up having his tongue amputated after chewing on a “pimple ball” made by Four Paws. Specifically the item is the pimple ball with bell. (Item #20227-001, UPC Code 0 4566320227 9) Chai was chewing on the toy, which because it only had one hole (instead of 2 holes) in it, a vacuum was created that sucked his tongue into the hole of the ball. Chia’s owner because aware of the problem when he began to whimper with the ball in his mouth. They tried unsuccessfully to remove it but his tongue was so swollen, it could not be released.

They took Chai to the Animal Medical Center, a world class veterinary hospital in New York City where veterinarians tried to try to remove the ball. Because the size of the opening in the ball was so small, all circulation to Chai’s tongue was cut off. The vets had to sedate him in order to remove it. Once the ball was removed, his tongue was so swollen he could no longer put it in his mouth. Chai was sent home with to be observed overnight for any changes. By the following morning Chia’s tongue had swollen even more. After several days, insertion of a feeding tube and tremendous pain, suffering and expense his tongue had to be amputated.

Apparently this was not the first dog to be a victim of the pimple ball. According to the company, no more pimple balls are being shipped and they are trying to correct the problem.