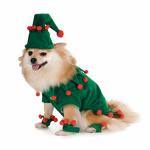 Top Pet Emergency Conditions in 2011. Whether you and your pets are heading over the river or through the woods this holiday season, remember keeping a close eye on Fido and Fluffy help to keep the holidays safe and healthy for all. According to Veterinary Pet Insurance, in 2011 pet policy holders spent nearly 25 million dollars on holiday associated veterinary medical conditions.  Out of 485,000 insured pets here are the leading pet health emergency conditions reported last year:

Gastritis is also called vomiting. Vomiting was reported to be associated with pets eating inappropriate items such as holiday plants including mistletoe, holly and lilies and drinking Christmas tree water.
Enteritis also referred to as diarrhea.
Colitis or inflammation of the large bowl leading to diarrhea often flecked with blood and mucus. Stress is usually the culprit.
Pancreatitis or inflammation of the pet pancreas often due to eating fatty foods including gravy, nuts and egg nog. Be careful as repeated bouts of pancreatitis lead to Pet Diabetes.
Gastric Foreign Body which means foreign objects found in the stomach. Common culprits include holiday decorations, ribbons and bones.
Hemorrhagic Gastroenteritis refers to vomiting and diarrhea with blood which is often related to inappropriate eating and holiday stress.
Intestinal Foreign Body refers to foreign object found in the intestines such as tinsel and other types of holiday décor.
Methylaxanthine Toxicity is another name for chocolate toxicity which may occur when pets eat chocolate and or other caffeinated products.

As far as cost, intestinal foreign bodies led the way costing nearly $3000.00 dollars per pet. On the other hand, enteritis or diarrhea was the least expensive condition to treat costing an average of $100 dollars pet. Pet gastritis or inflammation of the stomach which ranked number one on the list cost pet owners nearly $300 dollars to resolve.