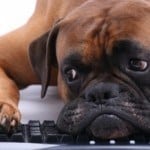 Pet Seat Belts. Seat belts for dogs…might sound like a novelty but it’s becoming a law! Mandatory pet seat belt laws are currently being considered in many states across the country and in New Jersey, proposed legislation is pending approval. Under New Jersey’s legislation pet owners must buckle up Fido and Fluffy, put their pets in a carrier or face the consequences. Penalties for non-compliant pets run the gamut from a 20 dollar ticket up to a 1000 dollar fine along with a potential disorderly conduct charge and up to 6 months in jail.

Apparently a 4th grade class inspired this “pet project” to actually be drafted. Assemblywoman Grace Spencer, who is responsible for the proposed legislation thought if pets are considered family members then they should be treated as such in the car as well as in the home, a philosophy this author and veterinarian couldn’t agree with more.

Now that this upcoming legislation will likely become law, the Center for Pet Safety decided to test the effectiveness of several pet restraint belts and harnesses to see just how effective current seat belt designs actually are in the event of a crash. Because the pet seat belt issue is relatively new, Federal Pet Restraint Safety Standards do not yet exist.

Unfortunately after testing several seat belt models none met the minimum safety standards in the initial study. The results were a complete failure and not even one pet seat belt proved to offer pets any protection or safety in the event of an actual accident.

Certainly researchers have their work cut out for them. Plans to develop Federal Safety Standards are in motion as are effective seat belt designs for manufacturers to explore.

A “AAA” survey revealed that 85% of dog owners admitted to being distracted by their pooch at some point while driving and there appears to be an increasing numbers of accident reports citing the pet as the cause of the fender bender.

Until Federal Standards are in place and pet seat belts are redesigned consider keeping Fido and Fluffy in carriers or at least confined in the back seat to minimize driver distractions and potential accidents.