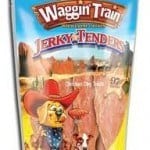 FDA’s Chicken Jerky Alert  Expands to Duck & Sweet Potatoes. Over the last several years more than 1300 dogs have become sickened, several of whom suffered from diseases ranging from Fanconi-Like Syndrome to kidney failure and death after consuming chicken jerky treats made in China. FDA investigators report that they are trying to figure out the cause yet have been unable to identify the exact culprit at this time, claiming the actual cause of illness remains an unanswered question. In addition FDA investigators have just expanded their research to now include duck and sweet potato jerkies.

On a webpage featuring questions and answers about its ongoing pet jerky investigation, the U.S. Food and Drug Administration (FDA) states in a recent update that complaints this year have expanded to other jerky pet treats, so its investigation likewise has broadened.

Despite testing various jerky treats for a variety of toxins and chemical contaminants and when possible inspecting manufacturing facilities in China no answers or clues have been detected.

Although over 20 brands of jerky treats have been implicated the most numerous online complaints were reported for Waggin’ Train followed by Kingdom Pets and Milo’s Kitchen respectively. A lesser number of complaints have recently been filed for duck and sweet potato or yam jerky’s. This author and veterinarian finds it noteworthy that not only chicken was found in the implicated sweet potato jerky treats, but no action has been taken to remove the tainted treats from retail store shelves, restrict US sales at pet food outlets including Cosco or even to halt production in China.

In light of the fact that the FDA currently inspects human food processing facilities at least once every 20 years, one must wonder as to the true efficacy of Chinese investigations actually being conducted for pet jerky treats especially in a communist country.

Pet owners wishing to file complaints should direct their complaints to the FDA’s Office of Regulatory Affairs, specifically reporting to their district consumer complaint coordinator.

The complaint reports available online were initially prompted by the Freedom of Information (FOI) Act. Apparently, if the FDA receives three or more FOI requests for the same product, they make an effort to post those records online.

The jerky treat illness for many results in a disease resembling Fanconi syndrome, a condition leading to kidney failure and mimicking diabetes with sugar also called glucose passing into the pet’s urine. Although the vast majority of affected pets are dogs a couple reports included sickened cats who nibbled on the treats.

Other dogs that became ill were reported to have more vague signs consisting of vomiting and diarrhea with or without blood, along with appetite loss and lethargy.

This veterinarian has dealt with over a dozen cases of dogs suffering with kidney failure and Fanconi-Like Syndrome personally. Dogs and cats of all ages, sizes and breeds are susceptible.

What’s a pet owner to do?

As a practicing veterinarian my recommendations include reading labels carefully, stop buying jerky treats of any kind and remember that aside from a good belly rub and lots of love, fresh vegetables make great treats. Vegetables whether fresh, frozen or cooked are safe, healthy and low calorie. Believe it or not many pets enjoy them as much if not more then their humans.