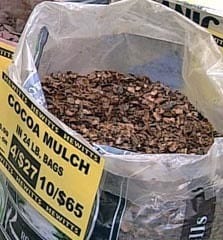 With Spring in the air, many homeowners and gardeners are sure to be outside getting their hands dirty. But veterinarians say cocoa mulch made by Hershey’s has a sweet-smell attractive to pets but also may be deadly to dogs and cats if ingested. “Cocoa mulch is a risk, especially to dogs,” said Dr. Carol Osborne, DVM of American Pet Institute in Chagrin Falls, Ohio.

Available at most home garden centers, cocoa mulch is known for its fine texture and the sweet smell the fresh mulch gives off. What’s unusual is that, it smells like a chocolate Pop Tart. That’s the best way to describe it. It really does have a chocolate scent. Aside from the odor, cocoa mulch can be dangerous if a dog or cat decides to eat it. It contains two key ingredients found in chocolate: theobromine and caffeine. Similar to eating chocolate, pets that eat just a few ounces of cocoa mulch may starting having stomach problems, which become worse as more is ingested. “Pets may become restless and excited. With time tremors and seriously seizures can develop which can be life threatening and in some cases fatal,” Osborne explained. “Puppies are naturally curious and many are attracted to various things around the yard. It seems to be more severe for small dog breeds and toxicity is dose dependant,” Osborne said. For pet owners it’s best to just avoid using cocoa mulch in your yard and/or garden.

Please pass this information along to family members and pet loving friends: Over the weekend the doting owner of two young lab mixes purchased Cocoa Mulch from Target to use in their garden. They loved the way it smelled and it was advertised to keep cats away from their garden. Their dog Calypso decided that the mulch smelled good enough to eat and devoured a large helping. She vomited a few times which was typical when she eats something new but wasn’t acting lethargic in any way. The next day, Mom woke up and took Calypso out for her morning walk. Half way through the walk, she had a seizure and died instantly.

Although the mulch had NO warnings printed on the label, upon further investigation on the company’s website, this product is HIGHLY toxic to dogs and cats.

Cocoa Mulch is manufactured by Hershey’s, and they claim that ‘It is true that studies have shown that 50% of the dogs that eat Cocoa Mulch can suffer physical harm to a variety of degrees (depending on each individual dog). However, 98% of all dogs won’t eat it.

Cocoa Mulch, which is sold by Home Depot, Foreman’s Garden Supply and other Garden supply stores, contains a lethal ingredient called ‘ Theobromine’ It is lethal to dogs and cats. It smells like chocolate and it really attracts dogs. They will ingest this stuff and die. Several deaths already occurred in the last 2-3 weeks. Theobromine is in all chocolate, especially dark or baker’s chocolate which is toxic to dogs. Cocoa bean shells contain potentially toxic quantities of Theobromine, a xanthine compound similar in effects to caffeine and theophylline. A dog that ingested a lethal quantity of garden mulch made from cacao bean shells developed severe convulsions and died 17 hours later. Analysis of the stomach contents and the ingested cacao bean shells revealed the presence of lethal amounts of Theobromine.