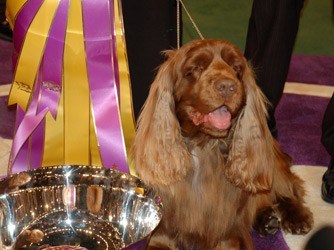 Can old dogs learn new tricks? It’s never too late and they’re never too old; ancient proverbs can come true and Stump provides living proof as he proudly touts his Westminster victory! Stump, a 10 year old Sussex Spaniel swept the crowd and judges off their feet taking home the coveted prize of Best in Show at the 2009 Westminster Kennel Club Dog Show At age ten, Stump is the oldest dog to ever win at Westminster. Beating almost 2,500 canine competitors, he was crowned the victor, taking the title of top dog. This marks a first for the breed winning this title. Incredibly, Stump came out of retirement just last week to compete. He was retired five years ago after recovering from an illness that kept him in Texas A&M University’s veterinary center for 19 days. The Sussex Spaniel won Best in Show by besting six other group winners. The group winners for 2009 are:

Considered by many to be the top prize in the dog show world, winning Best in Show at Westminster comes with universal fame and glory for the champion pooch. Last year’s winner, Uno the Beagle, may be remembered as histories most popular Best in Show!

Introducing Dog & Baby – The Key Is To Introduce Them Gradually
April 15, 2021